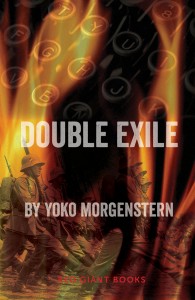 Many have written about the rise of Nazi Germany and the indelible mark it has left in history. But none has told the story of the plight of the German Jewish writers so well as Yoko Morgenstern has in Double Exile.  In a trifecta of countries, time, and cultures, Morgenstern weaves a spellbinding psychological drama that innocently begins when a graduate student from Japan comes to Germany to search out the story of Hans Carossa, one of Germany’s greatest but seemingly most forgotten modernist writers. In prose that brims with intelligence and humanity, Morgenstern shows how Carossa and his contemporaries struggle with their decision to stay or flee Nazi Germany, a decision that results in equally unfavourable fates—accusations of pro-Nazi alliances if they stay or internment in countries such as Canada if they leave.

This novel is an absolute must. Yoko Morgenstern’s sensitive exploration of art and political responsibility, of internal and external perspectives on times of crisis, and of the interconnectedness of and analogies between different (national) histories is stunning and makes Double Exile an essential contribution to the literary landscape of the new millennium.