“There were three thin 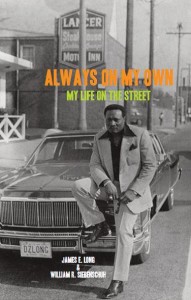 gs that made me want to take a hard look back at where I came from and what I’ve done and try to make sense of it. The first was getting shot, the second was getting old, and the third was working on this book.

Getting shot came first. It happened in Cleveland on April 26, 1976, and except for the fact that I was shot from ambush that evening, it was pretty much like any other day at that period of my life.

I was working as an enforcer for the black numbers rackets at the time, and since I sometimes made enemies and there were always other people who wanted to muscle in, I took sensible precautions.”

So begins the memoir of James ‘Diz’ Long as told to William Siebenschuh.  Born in 1925 Diz Long’s  life brings him into the orbit of such luminaries as Billie Holiday and Jim Brown as well as nefarious characters like Don King and Reuben Sturman, the porn king of Ohio. From his duty in the Triple Nickel Black parachuting unit to semi-pro football to nightclub emcee to number running and bodyguard and enforcer, Diz bears witness to crimes high and low as he survives the underground economy and lives to tell his tale.  Compulsively interesting and endlessly fascinating this memoir will be read in great gulps as you follow Diz on his journey.